I’d like to have a word with the guy who made this poster for the upcoming (sure to be a hit) movie The Haunting in Connecticut. 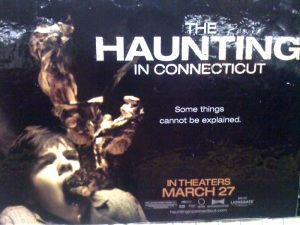 The only scary things in Connecticut are the vast amounts of white people who think wearing sweaters over their shoulders is okay.

If you can’t read my fine subway photography, the tagline for the film is “Some things cannot be explained.”  But here’s the thing: I think I can explain what’s happening here pretty well.

a.k.a. ralphing, spewing, losing your lunch, blowing chunks, puking and my personal favorite: buying the buick.

The kid is fucking puking.  And… I’m done!  I explained it. Little Sammy probably didn’t listen to his dad when he told him that he better eat his broccoli and when Sammy copped an attitude dad had to shove the veggie down poor Sammy’s throat causing him to ralph which never would have happened if he had just listened to dad in the first place.

Or maybe the kid just found out that Flo Rida has the number one song in America right now.

I don’t know much about designing movie posters, but hopefully we can try a little harder next time. You know, put some thought into it dammit.  Like this blog post, I thought about this for like 17 minutes straight.

Tagged as brooklyn, please don't send me a link to stuff white people like, train thoughts

38 responses to “sorted out”